In a past blogpost, I’ve explore the backdoor criterion: a simple graphical algorithm, we can define which variables we must include in our analysis in order to cancel out all the information coming from different causal relationships than the one we are interested. However, these variables are not always measured. What else can we do?

In this blogpost, I’ll explore the front-door criterion: i) an intuitive proof of why it works; (ii) how to estimate it; (iii) what are its fundamental assumptions; finally, (iv) an experiment with monte-carlo samples. Whereas the back-door criterion blocks all the non-causal information that \(X\) could possibly pick up, the front-door exploits the outgoing information from \(X\) to derive a causal estimator.

The limits of the back-door: a quick example

Let’s assume the following DAG, which is a darling of Pearl’s work. Does smoking cause cancer? 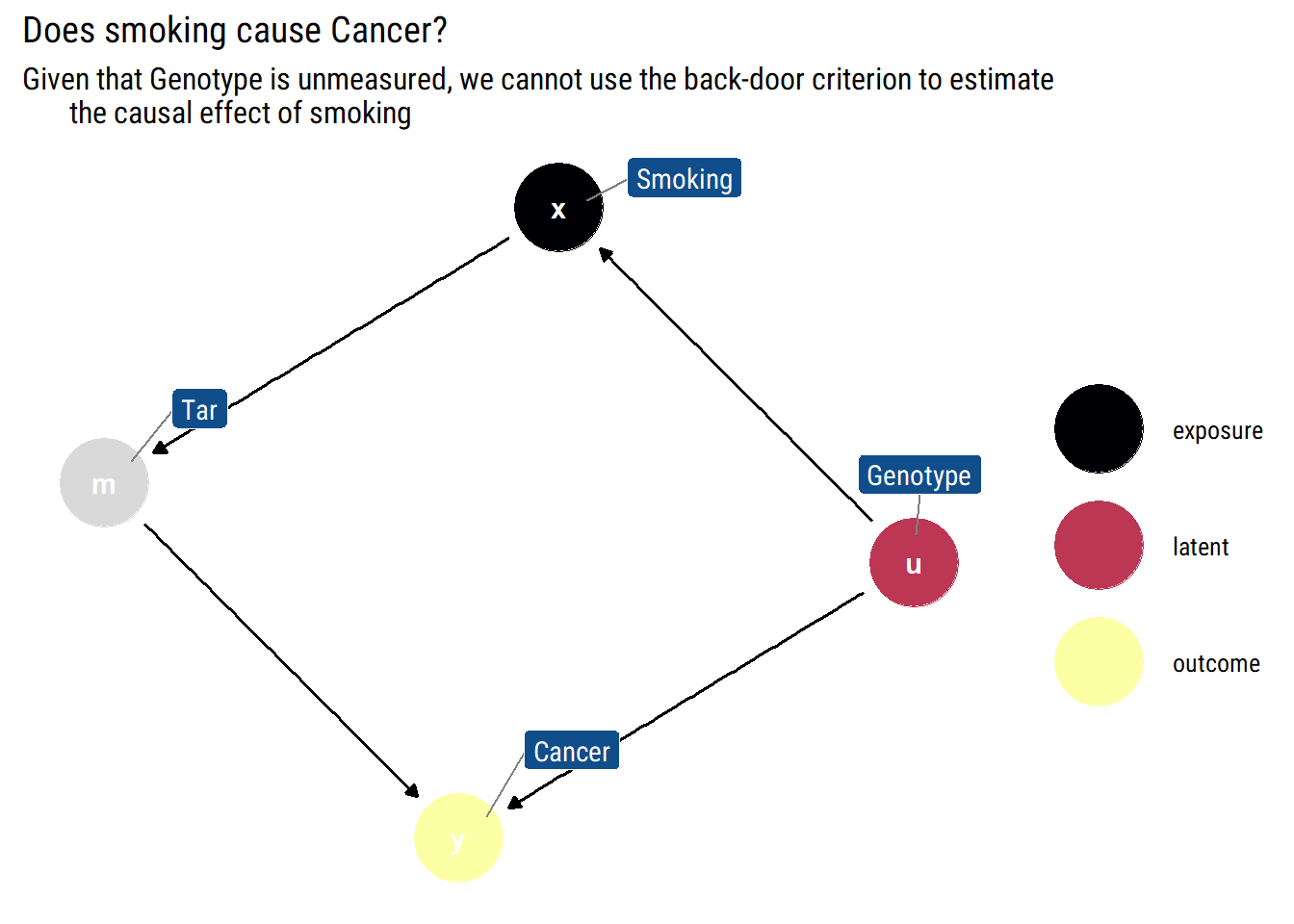 Given that we cannot measure genotype, we cannot use the back-door criterion to stop \(Smoking\) from picking up the causal effect of \(Genotype\). Therefore, one can not use the back-door criterion to ascertain which portion of the observed association between smoking and cancer is spurious (because it is attributable to their common cause, Genotype) and what portion is genuinely causative.

Consecutive applications of the back-door criterion

We intervene on smoking and check the respective effect for each value of tar:

Given that smoking blocks all backdoor paths into tar, we can estimate \(P(Y \mid d o(M))\) using the back-door adjustment:

Considering that there are no backdoor paths from smoking to tar, we can write \(P(M | do(X)) = P(M | X)\). Therefore, we can re-write our entire expression for \(P(Y \mid d o(X))\) in terms of pre-intervention probabilities:

This is the front-door formula.

Therefore, in a regression setting we can estimate the causal effect using the Average Treatment Effect (ATE) via the FDC thus. Formulate two linear regressions:

Our estimate of the ATE is given by:

When can we use the Front-Door criterion?

We’ve given an intuitive proof of the Front-door criterion and given an empirical estimation technique. But what exactly have we presupposed that allowed us to do all of this? In other words, what are the fundamental assumptions behind the criterion?

When these conditions are met, we can use the Front-Door criterion to estimate the causal effect of \(X\).

Let’s work a Monte-Carlo experiment to show the power of the backdoor criterion. Consider the following DAG: 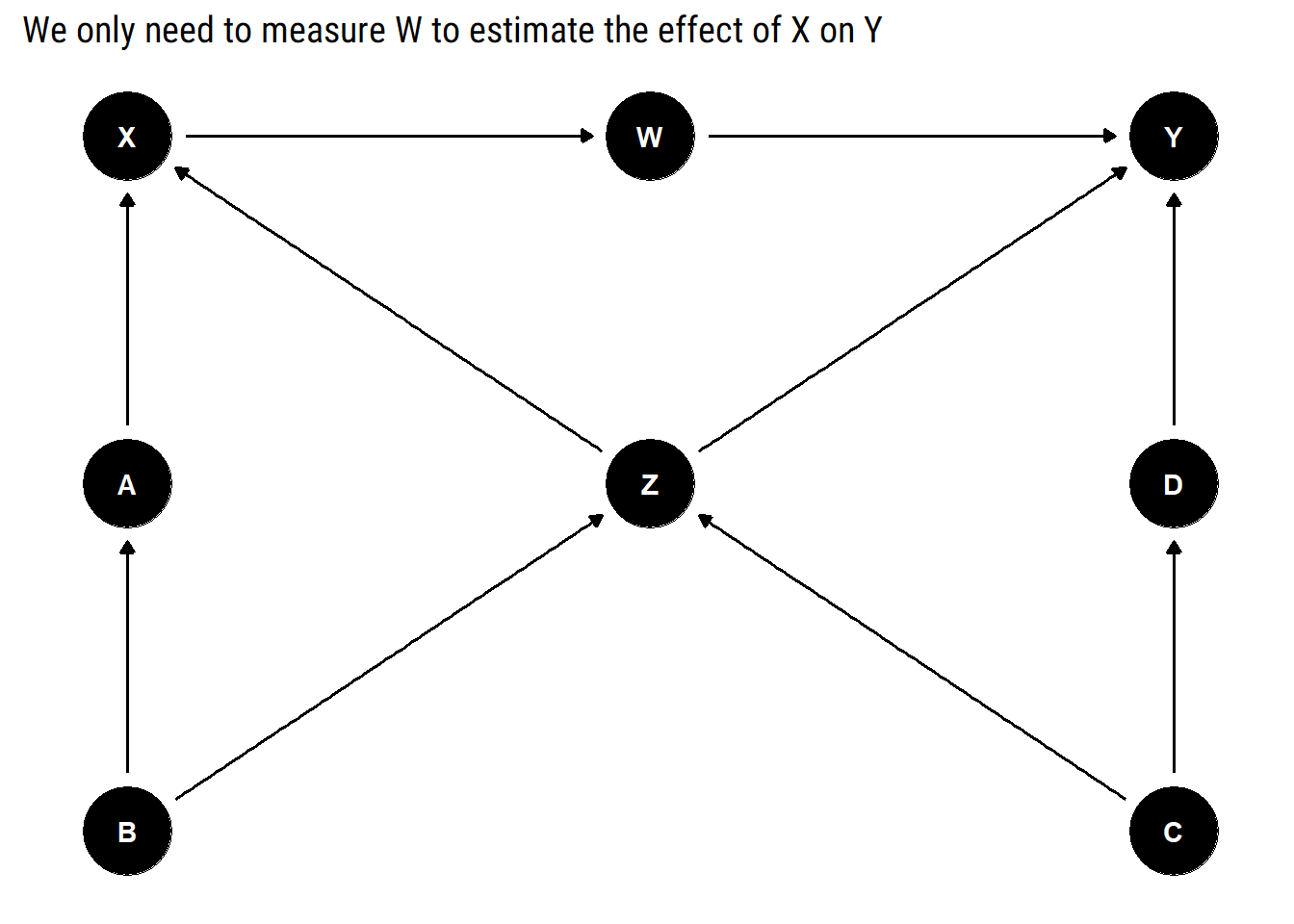 Assume that only \(X, Y\), and one additional variable can be measured. Which variable would would allow the identification of the causal effect \(X\) on \(Y\)? The answer is all in the front-door criterion! We only need to measure \(W\) to be able to estimate the effect. Notice that:

Therefore, we can use the front-door criterion.

Let’s use a Monte-Carlo simulation to confirm the answer.

In this simulated dataset, the causal effect of unit of \(X\) on \(Y\) is -4. Let’s recuperate this effect by using the back-door criterion to find out for which variables we must control. 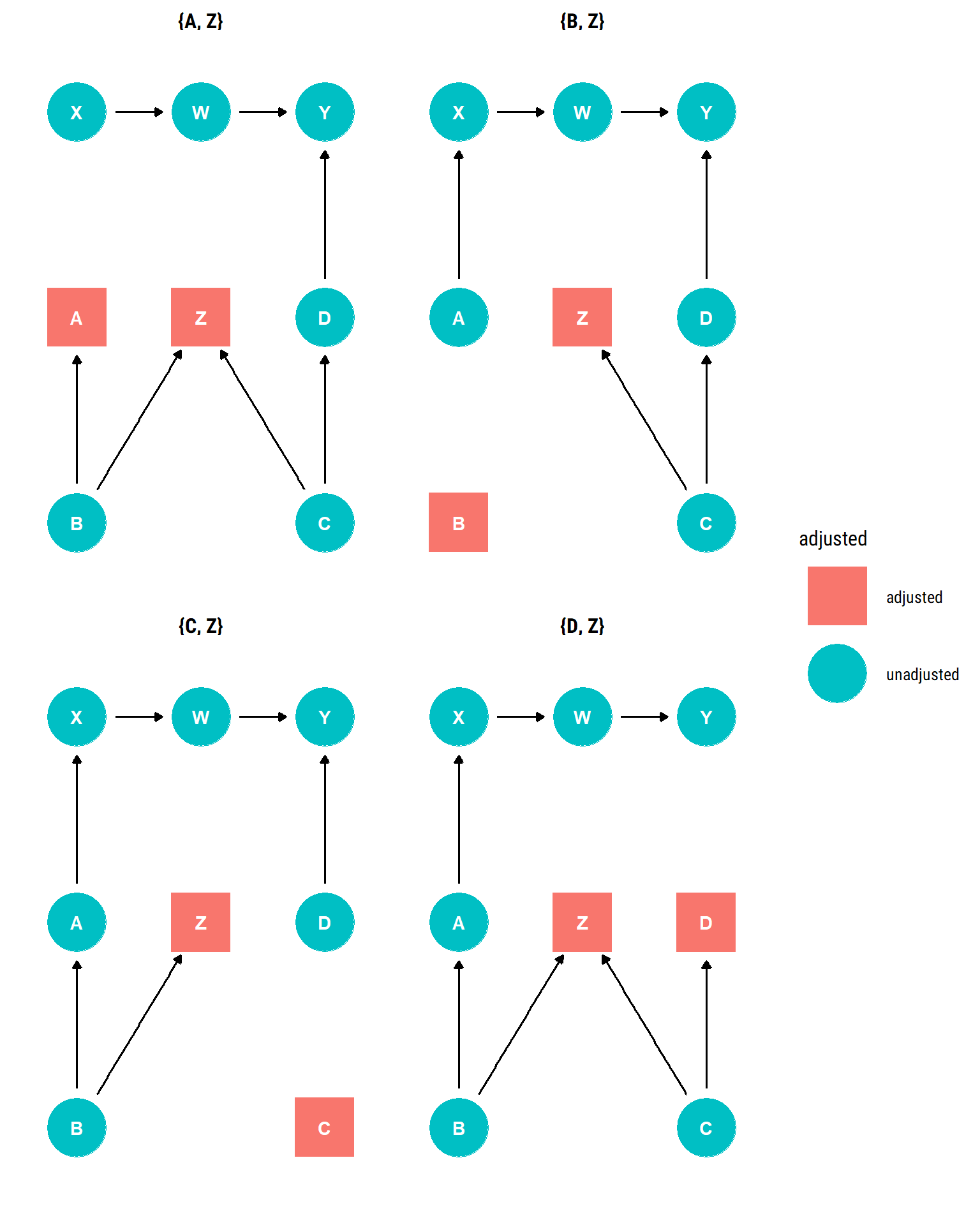 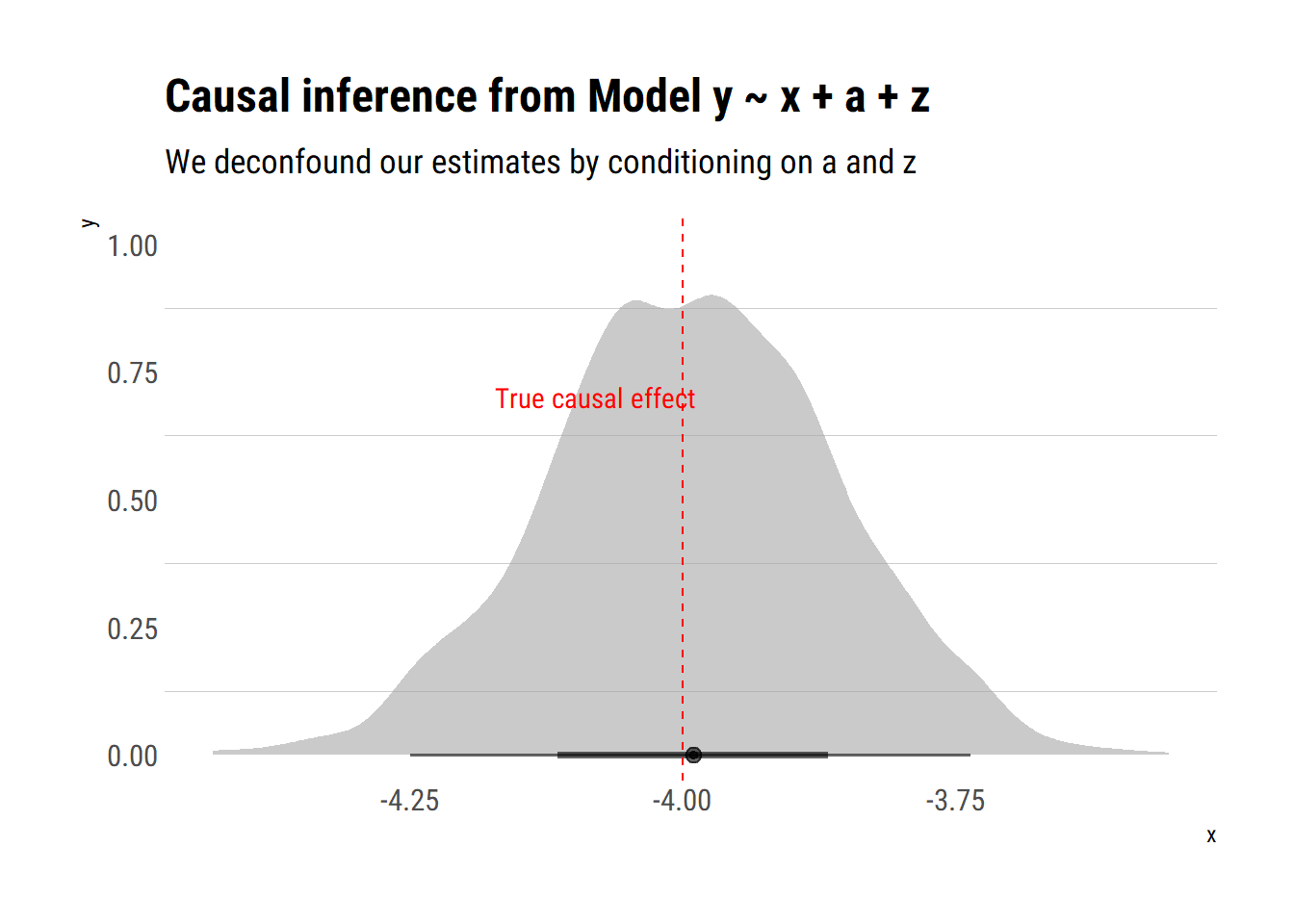 Given our DAG, a testable implication is that we must arrive at the same answer by using the front-door criterion. Remember that it is just a consecutive use of the back-door criterion that translates into two regressions. Therefore, we can use a multi-variable model thus:

And indeed, we arrive at the same answer! 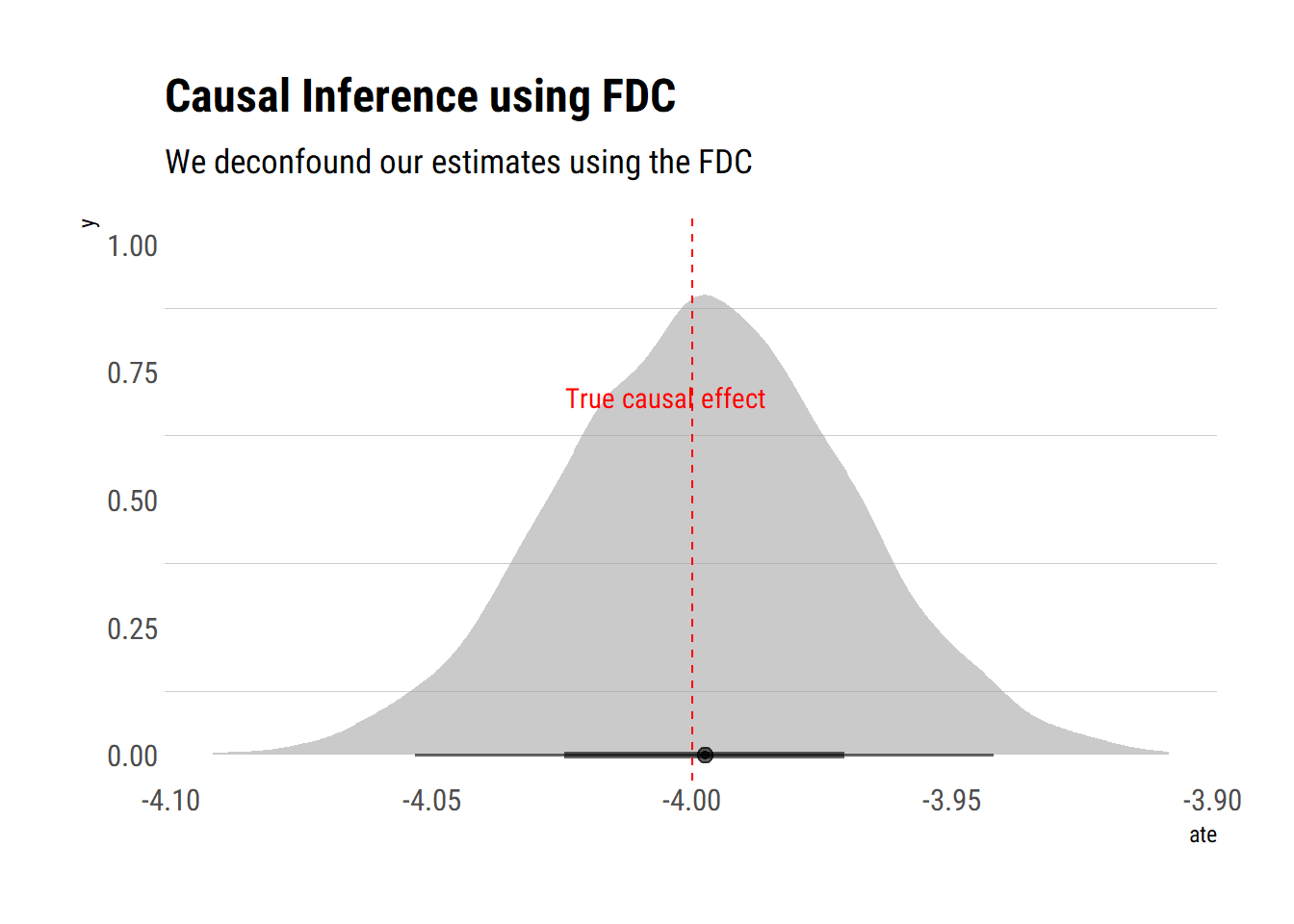 Besides Chapter 3 of Pearl’s Causality, I found this terrific paper (PDF) by Bellemare and Bloem.